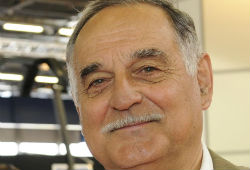 The 2016 World Ski Award for Outstanding Services to Ski Tourism was presented to the French ski industry's very own grand rêveur, and the inspiration and builder of Val Thorens – Pierre Josserand.

His career started in 1969 as an ambitious young engineer with a dream to build a world class ski resort that could offer year-round skiing. The French government, the regional and local councils and most politicians were all against the project which was deemed crazy and nothing more than a “wild dream”.

Pierre joined the group of only 5 families living in a secluded field some 2,300 metres above sea level and, against all odds, built the first ski lift in 1971.

Over the next decade, an ambitious plan to create a b-2-b travel agency to attract tour operators from across the entire world was successfully implemented and an accommodation infrastructure was developed creating 3, 4 and 5 star lodgings.

Almost 50 years later, Val Thorens now has 25,000 beds, 300,000 visitors, 2 million overnights stay per winter and has seen the best occupancy ratio in Europe for the past 15 years.

With a unique gift of foresight, vision and unyielding ambition that only very few have, Pierre is also one of the most humble men in the ski industry. And the World Ski Award salutes him.

In recent years, and beyond the boundaries of his native France, he has acted as lead consultant on ski resort projects as far afield as Canada, USA and China. Back home he has guided big city urban development, and the same government that deemed him crazy all those years ago have awarded him the French Legion of Honour – the country's highest order for civil merits.

There is a lesson here to be learnt by all of us. Big government isn't always right, and always believe in those who dare to dream. Pierre Josserand -le grand rêveur.