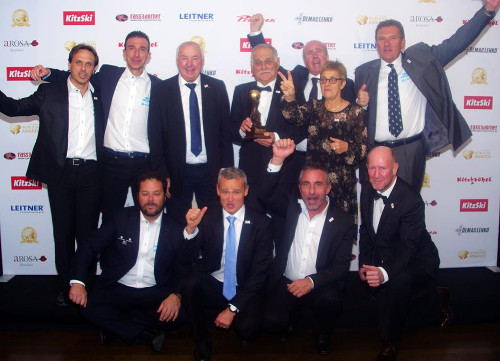 The ski tourism brands pushing the boundaries of industry excellence have been revealed at a red carpet gala ceremony in Kitzbühel, Austria. The leading figureheads, decision-makers and innovators of the wintersport industry gathered at the newly-refurbished A-ROSA Kitzbühel for the 7th annual World Ski Awards to find out who amongst them had been crowned the finest in their fields.

Meanwhile, in a special category to acknowledge his pioneering work in the ski industry, Kimihito Kamori was honoured with ‘Outstanding Contribution to Ski Tourism’.

World Ski Awards also unveiled a new accolade to recognize the future stars of the ski tourism industry. The ‘Dr. Josef Burger Rising Star Award’ will call upon organisations across the global ski industry to nominate young staff with the potential to become the industry leaders of tomorrow. The winner will be chosen annually by Dr. Josef Burger, CEO, Bergbahn AG Kitzbühel.

Hosted at A-ROSA Kitzbühel for the seventh consecutive year, World Ski Awards 2019 brought together representatives from ski nations across Asia, Europe, Oceania and The Americas. The prize-giving ceremony marked the climax of a three-day itinerary that included exclusive networking events, gourmet dinners, site-seeing tours, as well as private skiing on Kitzbühel’s legendary Hahnenkamm.

Nestled between the Kitzbüheler Horn and Hahnenkamm mountains, Kitzbühel offers unlimited options for a fun and active stay across all seasons. The legendary alpine resort boasts a unique charm and an unmistakable blend of tradition, legend and beautiful landscapes.

World Ski Awards is globally recognised as the leading programme in the global ski sector. Votes are cast by industry professionals and the public in a range of categories, including best resorts, hotels, chalets and tour operators.

Sion Rapson, Managing Director, World Ski Awards, said: “Kitzbühel, the home of legends, has proven a world-class host on what has been a magnificent evening of triumph for the ski tourism industry. We have had the privilege of recognising the leading organisations from across the world and my congratulations to each of them.”

For more information about World Ski Awards, visit worldskiawards.com and for a full list of winners click here.

World Ski Awards – the only global initiative to recognise, reward and celebrate excellence in the ski hospitality industry – is the sister organisation of World Travel Awards currently celebrating its 26th anniversary.

Launched in 2013, World Ski Awards aims to drive up standards within the ski tourism industry by rewarding the organisations that are leaders in their field.

Votes are cast by professionals working within the ski industry – senior executives, travel buyers, tour operators, agents and media – and by the public (ski tourism consumers). Votes are submitted online at the World Ski Awards website.