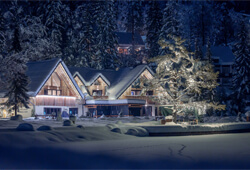 The JCR (Jasna Chalet Resort) - Re:vitalization of Jasna project with the goal to re:establish alpine resort Jasna Chalet Resort was launched in 2015 with the vision of creating a model example of a sustainably oriented integrated tourism product in such an exceptional location in accordance with the local, Slovenian tourism development strategy on sustainable tourism orientation and following the starting points of the Green Slovenian Tourism Scheme. High added value: as proof that such products can be made to have a positive impact on the environment for nature, the local population and are an additional magnet for visitors and bring high added economic value. We set out with the aim of combining and preserving both natural and cultural heritage of micro and macro locations into a single tourist product.

Since 2015, preparations have been underway, coordination with all actors and the preparation of substantive proposals. Until the opening, we obtained 122 additional consents and permits. We would not even need a significant part of these given the legal status of private land and water, but we still asked for them with a clear starting point: "We want to be sustainable; give us clear starting points and conditions so that they do not stop the project but are feasible and added value to the final content of the project! ". In doing so, we were guided by the study of autochthony and sustainable orientation by Dr. Bavcon, Director of the Botanical Garden in Ljubljana.

The main starting point was "Together we are stronger!" and around the content, we brought together all the key players; with the support of the local community, administrative unit, Ministry for Tourism, and competent authorities, we also formed a comprehensive content proposal, where we considered the wishes, conditions and recommendations of the competent authorities, which together form the content of the project JCR-Re: vitalization of Jasna. Accordingly, all procedures for obtaining all necessary consents and permits were carried out. Bottom line - we have not received any special indulgences, but also no "harassment" so far, but all content orientations have contributed to many small but important details of the project in terms of sustainable content. Whether it's recycling existing wood paneling to keep CO2 in the wood and avoidinf cutting new one, dressing the building into Slovenian sheep wool, minimizing the CO2 footprint by heating with glacial water, rescuing an old pine tree on a pier or building a new natural habitat for fishes, frogs, and ducks at Lake Jasna where we moved them on the recommendations of local conservationists when setting up a pier on the lake and arranging the surroundings.

So we patiently built our story and with even greater pride in the 5th years since the start of preparations on January 26, 2019, we opened Jasna Chalet Resort in such an exceptional location of Lake Jasna in Kranjska Gora - which is certainly one of the alpine pearls of Slovenia a gathering place for visitors to Kranjska gora; right at the beginning of the Triglav National Park and along the picturesque road to Vršič; known for its one and only view of the mountains and the play of unique reflections in the lake. On the shores of Lake Jasna is a more than century-old story about the development of tourism in Kranjska Gora, which was written by the first visitors to Jasna since 1902, when the Razor Hotel, the first hotel in Kranjska Gora, opened. As early at 1929, the so called Royal summer retreat with swimming pool with 20 changing cabins, a private restaurant was built here at Jasna to extend season from winter to summer too.

Welcome to visit us.